Joshua Johnson is a Seattle-based travel blogger who specializes in social media content creation and promotion. His website is Travel Media Ninja, and his personal blog is right here. Josh also writes for the popular travel site The Travelers Notebook and heads the team at the travel video site MatadorTV. Don’t miss the camel video at the end! -Lauren

One of the best things about going to the San Juan Islands is just getting there. Being on the water among orca whales and the 450 islands that comprise the San Juan Archipelago is a wonderful way to pass an hour.  Have your camera ready and keep your eyes on the stretches of water that separate the islands for the abundance of marine life you might spot–seals, sea lions, orcas or humpback whales. 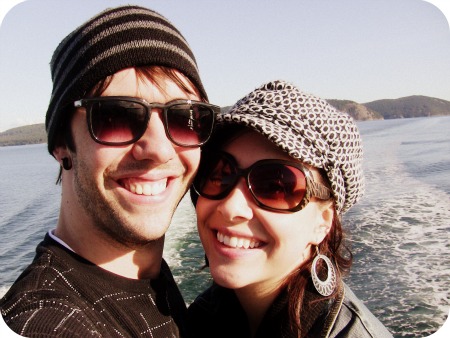 My wife Bridget and I arrived at Friday Harbor just as dusk began to swallow San Juan Island. We checked into our room at Earthbox Motel and wandered out into the sleepy downtown in time to grab happy hour at the Blue Water Bar and Grill.

“Mona is this massive camel, a real camel,’ she began, ‘and if you stand at the fence and yell MOOOOOOOO-NA! she will come running up and you can take pictures with her. Everyone on the island has a picture of Mona. Oh, and it helps if you bring apples. She loves apples.” 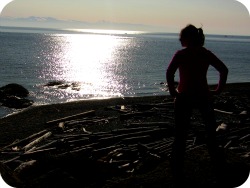 We had two days on the island, so decided to save Mona for day two. First, we wanted plenty of beach time.

We left Kathy to venture to South Beach, inside of San Juan Island’s National Historic Park (map). The shore there is a tangled procession of drift wood and wet rocks that tumble in a gentle surf.  We indulged in the simple pursuit of rock collecting, holding small agates up the the sun to gauge their quality.

Also within the Park on the island’s southern tip is the old American military camp and some hiking trails. We spotted a trail that climbs Mt. Finlayson, climbed out of the car and started up the path that we hoped would afford some nice mid-afternoon views. The climb is easy, and a faint Mount Rainier was visible in the far distance. The real treat, though, was the two fawns grazing on the breezy knoll just before us. The brothers nibbled grass hundreds of feet above a dazzling sunlit Straight of Juan de Fuca, endowing them with a perfect silhouette. 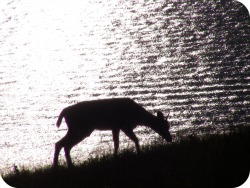 The sun was in retreat as we wound our way up the western side of the island to Lime Kiln Point, a popular place to spot orca whales that feed on the proliferation of sea life in the deep, dark waters. The sun set on us too soon, but we did catch furtive glimpses of a pod of orcas in the distance. That’s OK. We got cozy on a beach rock and let our first full day on San Juan Island come to a close.

The next day was not only our 6-year anniversary, it was also Bridget’s birthday. So naturally, she indulged in a body rub and wrap at Lavendera, Earthbox’s on-site spa. After Bridget was exfoliated, rubbed, wrapped, massaged and generally pampered at Lavendera, we hopped in the car to see some of the other sites Kathy had mapped for us. First on our itinerary was Krystal Acres Alpaca Farm. 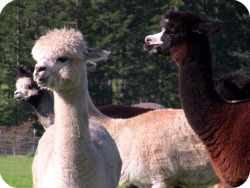 For those of us who are not Peruvian shepherds, Alpacas are the woolly, docile relatives to llamas and are prized for the their wool. And they are improbably cute.

Our final day on the island had but one pretext, a fabled camel named Mona.

We brought the car to a stop on the side of the road next to the San Juan Vineyards and scrambled down a small embankment, sidled up the crumpled, weed-strewn fencing and yelled: “Moooooooonnnaaaaa!!”

Mona is a mountain of tawny brown fur a hundred yards away. She lifts her head but doesn’t stir. We try again: “Moooooooonnnaaaaa!!!”

We go on like this for a few minutes, calling across a shaggy field at a reclining camel until we managed to attract a llama. After the alpaca farm, a llama just isn’t going to cut it. Then we remembered the apples.

We pile back into the car, pull up to the supermarket and load up on apples for Mona. When Mona saw us holding a Granny Smith, she rose and shambled toward us at a clumsy gallop.

Mona loves apples. She doesn’t like carrots. Not even the llama wants carrots, so save your carrots for horses. Mona is so big that she is like a mammal SUV. Her gigantic head sweeps to and fro on a mile-long neck.

We fed her apples and when she had pulverized every last one with massive molars, she took a test nibble of my shirt, smearing me with sticky reams of camel saliva.

Wiping the camel slobber our hands, Bridget and I look at each other and laugh at the final note of our romantic weekend away from Seattle–camel spit!