Will Tourism Be Privatized?

I have to hand it to them for stepping up right away and offering real solutions. After all, the stakes are high. 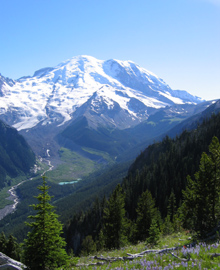 A collection of tourism industry folks, from Red Lion Hotels to the Port of Seattle, convened a summit in SeaTac last week attended by about 450 people tied to travel and tourism. The purpose? To present initial plans going forward without a Washington State Tourism office. The state-funded agency, who just four years ago enjoyed a doubling of its budget along with a mandate from Governor Gregoire to grow tourism, will close its doors on June 30.

The state budget is in shambles. Everyone knew this was coming, but it still stings. I felt it in the room, I heard it in the voices of the winemakers and innkeepers I talked with who’d gathered there, hoping to be reassured and inspired by the summit. Tourism is big business in Washington – BIG. We’re talking $15.2 billion spent by travelers  in 2010–the majority of them from out of the state and even from other countries–supporting a whopping 143,800 jobs. Sure, the state’s tourism office isn’t whom to credit for that economic engine, but their marketing helps. Some say it helps a lot, particularly to help draw those out-of-state and international tourists to come here instead of somewhere else, and to stay longer, spreading their dollars around from Port Townsend to Zillah.

There’s a lot of competition for those tourism dollars, you know. Take Washington, for example. We’ve got a world-class city, fabulous seafood, wine country, three gorgeous National Parks and 9,000 miles of hiking trails. Oh, but Oregon has many of those things, too, and they’ve got a more popular coast, to boot. But wait! Washington has whale watching! Well, so does British Columbia, and you know what? They have a lot more whales up there.

Not convinced yet? A lot of folks aren’t. After all, why should millions of state taxpayer dollars go to advertise tourism? The beneficiaries of tourism dollars are all private sector, like retail, restaurants, wineries, airlines and lodging. (I suppose public land agencies who get trailhead parking pass dollars could be considered beneficiaries of tourism, but that’s a stretch.) So why not let these private sector businesses and corporations foot the full bill to bring tourists to Washington state?

I get that. I think it makes some rational sense. But consider this: what happens when you have a major airline or a car rental company essentially leading your state’s tourism marketing effort? My guess is that promoting and enhancing sustainable tourism will not be at the top of their strategic agenda.

If the economy rebounds, some public dollars may come back and revive the Washington State Tourism agency, but that could be years away. In the meanwhile, the main message from the summit last week was to act quickly to “protect our marketing assets.” The two big proponents of this message were from representatives of tourism organizations for the states of California and Alaska. Both states have faced crisis-level funding cuts for tourism promotion before, and both bounced back. Mike Gallagher from the California Travel and Tourism Commission (CTTC) spoke to a rapt audience about his state’s bounce back after the 1989 earthquake in San Fransisco to become the #1 tourism destination in the U.S., bringing in $50 billion in tourism spending per year. His answer? Industry involvement. His commission’s funding source? 79% is from the car rental industry.

What happens next? To be fair, the newly-formed Washington Tourism Alliance is still in its infancy, with no formal board or strategic plan as of yet. Business interests have stepped up to lead it with both their people and their pocketbooks (the Port of Seattle announced a generous contribution of $150,000 at the summit, and this was met with applause). There’s a lot to do in short order, and “protecting assets” is at the top of that list, from keeping the popular Experience Washington website online and useful, to maintaining advertising campaigns already in motion that target key audiences.

How effective the Washington Tourism Alliance will be in engaging the diverse tourism interests across the state will be one of their next challenges. Some very impressive public interest / private interest partnerships have been fused in the recent past in Washington that promote sustainable tourism in rural communities, for example the North Cascades Initiative, the National Geographic Central Cascades Geotourism Map, and the Great Washington State Birding Trail. Other non-government organizations do some pretty heavy lifting promoting the state’s natural assets to visitors as well (the organization I work for, Washington Trails Association, comes to mind.) It’s true that small B&Bs  and NGOs don’t have the money to help supplant the public funds that fueled the Washington State Tourism office the way the Port of Seattle does. But, they have a great deal to offer as partners in the effort. I hope the Washington Tourism Alliance will save space at the table and invite some of these folks onto their Board when the time is right.