Feed the Salmon Babies at the Wizard Falls Fish Hatchery

Plunk! Plunk! In one quick second, two small fistfuls of small brown pellets were hurled into a small pond where dozens of mid-sized brown trout scrambled to snag a tasty morsel.

We were in Central Oregon near Camp Sherman on the Metolius River, where we’d stumbled upon an unlikely family-friendly destination–a state-run fish hatchery.

Fish hatcheries are longtime residents on many Northwest rivers. Over a century ago, the first hatcheries were built to replace the loss of wild fish populations that had been hit hard by the construction of dams and destruction of critical habitat. By nearly all accounts, they were an indispensable tool at a time when fish populations were endangered of being lost forever.

But hatcheries contribute their own unique problems to the recovery of wild fish populations. Simply put, hatchery salmon and trout are genetically impaired. According to a study from Oregon State University, even when hatchery-bred steelhead trout do survive in the wild and go on to reproduce, their wild-hatched offspring will carry those same genetic impairments and will be significantly less successful. But its not just the loss of unsuccessful hatchery fish that’s the problem. Hatchery fish may interbreed with wild fish and reduce the overall fitness of native, wild populations. And this happens quickly. The impact of hatcheries on salmon is so profound that in just one generation of natural selection, traits are selected that allow fish to survive and prosper in the hatchery environment, at the cost of their ability to thrive and reproduce in a wild environment.

You know what’s fascinating? Salmon. Salmon are fascinating. We know now more than ever how incredibly evolved wild salmon and trout of the Pacific Northwest are to their native streams. The precise timing of their return to their native stream seems to be genetically programmed. They have natural resistance to location-specific diseases. And so, the focus of fisheries managers has pivoted somewhat towards the goal of helping wild fish populations recover. Hatcheries are still an important management tool, though, especially in providing fishing opportunities to anglers and meeting Native American treaty obligations.

That was a tangent. Ah, yes… I was telling you about our family’s stop at the Wizard Falls Fish Hatchery.

We’d opted for the stop on high praise from a local resident who assured us our 3-year old would have a blast. And, he did.

The hatchery is run by the Oregon Department of Fish and Wildlife, and is open to the public so it can serve as an outdoor classroom of sorts. There are large open tanks and ponds full of different species of fish that are at various stages of juvenile development.

The most important thing to know about your trip here is that you must bring quarters. You don’t need a lot of them, as 25 cents gets you a pretty big handful of fish food. If you help your kids pace themselves, you can make that plunk! plunk! plunk last for a good five minutes or more.

If you bring a picnic lunch, there are benches around the large pond to eat on, picnic tables sitting about and plenty of green grass to spread a blanket upon. A few hiking trails leave right from the parking lot, so you could combine a visit to the hatchery with a  hike and make a day of it. 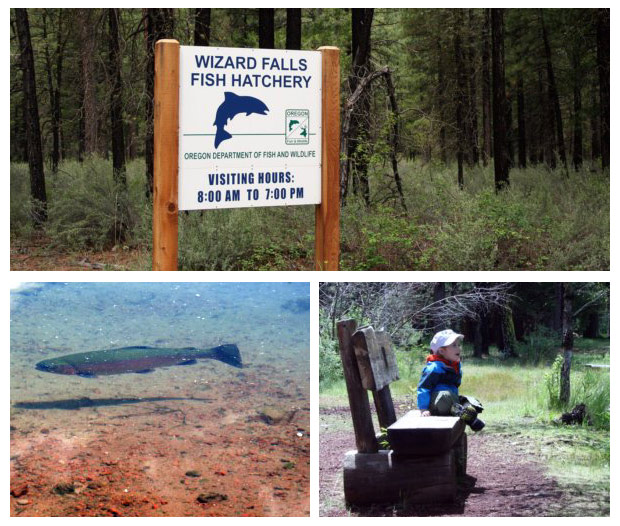 IF YOU GO: Wizard Falls Fish Hatchery is about 20 miles west of the town of Sisters.  Take Highway 20 west out of Sisters for 10 miles. At the Camp Sherman road sign, Road 14, turn right and travel 10 miles to the hatchery entrance.