It’s no big secret that I’m not from Seattle. I let loose a y’all now and again, and I still mispronounce “Yakima,” ending it with a muh instead of a maw. These are common Midwestern transplant missteps. But after 15 years here, the lines are blurring. Just the other day, while noshing on some grilled sea scallops over arugula pesto pasta I’d made fresh from our garden, I pondered my culinary progression. 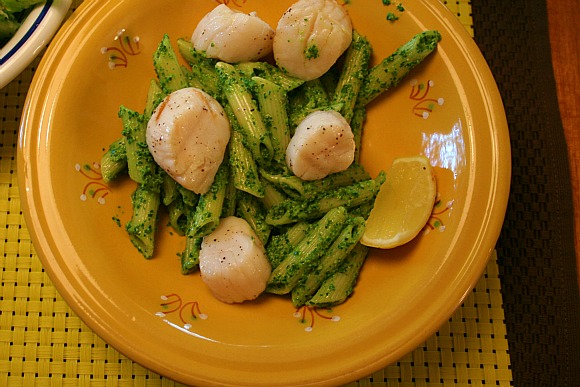 See, I grew up on a steady diet of tuna noodle casserole.

For the better part of the last two decades, I’ve been an indisputable “foodie,” but this was not always the case. The green beans of my youth came out of a can. My shift to gourmand began when I bought my first copy of Martha Stewart Living as a late teen. Flavored coffee and an unnatural obsession with chilled soups soon followed. A few years later, a cross-country move to Seattle sealed the deal. My spice rack expanded, and soon housed jars of spanish paprika and epazote. Old Milwaukee was banished and replaced with IPA. A jar of preserved lemons has a permanent place in my fridge.

Cooking, tasting, growing and eating are all avid hobbies of mine, the operative word being hobby. No one will ever ask me to cater their party. My advice is not sought on wine pairing. And this is all perfectly fine with me. I just want to eat. Always a gourmand, never a gourmet.

The Pacific Northwest is a refuge for people like me. We’re foodies, not chefs. We dabble in growing heirloom tomatoes and savor our fresh, local seafood. And what we love, more than anything, is being in the know. We know that the best salmon rub in town is found at World Spice, and that “microcreamery” means small-batch ice cream.

And now, there’s a book for us. A Seattle foodie bible, if you will. 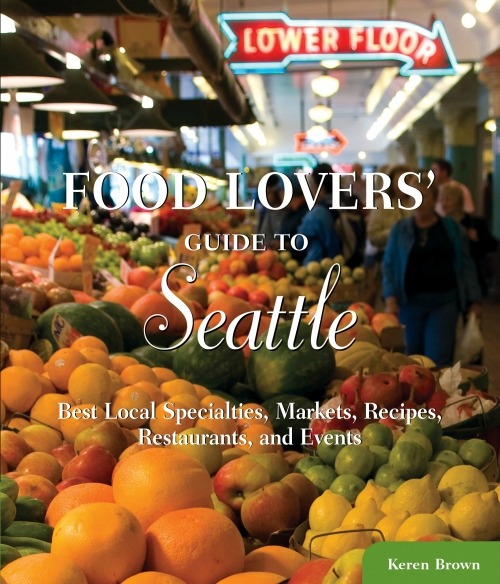 Local food blogger Keren Brown just released her first book, Food Lovers’ Guide to Seattle: Best Local Specialties, Markets, Recipes, Restaurants & Events. It’s a purse-sized paperback you can carry along with you, and it’s worth every lightweight ounce.  Keren skipped the big, bold photography that could have taken a book like this in the direction of a coffee-table tome that is only flipped through. She also skipped the wordy, playful prose that is so common on foodie blogs. The substance of Food Lovers’ Guide to Seattle is indisputably its well-researched, useful content.

When one of Seattle’s most popular food bloggers writes a book, there’s buzz. A lot of buzz. I’m a sucker for buzz. I bought my copy on its release date and began eating my way through it the very next day with my first visit in years to the Columbia City Bakery for an americano and a bear claw filled with almond cream. 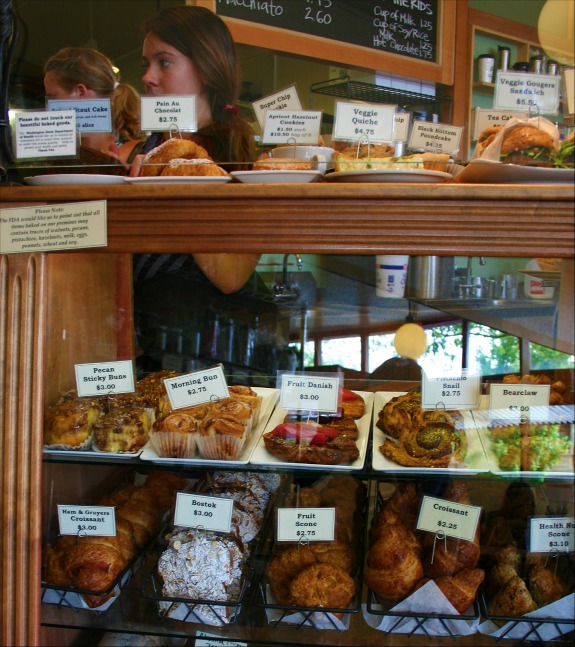 The eating continued. Next up on the restaurant front–Blackboard Bistro in my own neighborhood of West Seattle. In many of Keren’s recommendations, she takes you behind the scenes to bring you the stories of the people behind the counter or over the stove. At Blackboard Bistro, I sat down to my dinner of hand-shaped gnocchi in smoky tomato sauce and wondered if chef Jacob Wiegner’s nomadic past through New Zealand and Australia had influenced the dish’s unique combination of flavors. (I have no idea if it did, but it was fun to wonder!)

The book delves far beyond pricey eateries. My favorite sections are the ones about specialty stores and markets. If you don’t live in West Seattle and bus past it every day, you might not know of The Swinery, where only sustainably-raised animals pass through the door for butchering. Many a West Seattleite swing by here on a weekly basis to pick up their house-made applewood smoked bacon for Sunday brunch. I stopped eating beef, poultry and pork long ago for environmental reasons, but if by chance I felt an insatiable need for swine someday, I’d be grateful for a sustainable source right up the street.

The guide highlights local food festivals, names the best farmers’ markets, and includes a handful of recipes from local eateries. I’ve already got a bookmark on the recipe for golden beet risotto made with Beecher’s flagship cheese, and am waiting only on my garden beets to grow just a little bigger.

A clear standout is this book’s organization. It’s recommendations are sectioned by neighborhood, and although the neighborhoods are quite broad (north, central, downtown, south and west seattle), I rather prefer it this way. In Seattle we have a tendency to hyper-compartmentalize our neighborhoods, and this book breaks those invisible lines down a bit and encourages exploration beyond foodie hotspots like Ballard and Capitol Hill. If it weren’t for this, great geographic outlyers like the Persian Minoo Bakery in Lake City or Hallava Falafel foodtruck in Georgetown might have been left out. 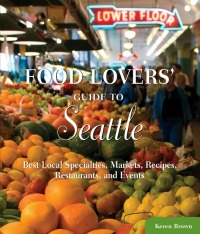 This book is going to stay in my backpack for awhile, I can tell. After all, one has to eat on a daily basis, no?

Get to know Keren Brown – read my Q&A with the author of Food Lovers’ Guide to Seattle.

For a bite-sized sampling of the kinds of recommendations you’ll find in Food Lovers Guide to Seattle, check out one of my favorite Frantic Foodie posts, The List- Getting Through the Seattle Food Scene One Bite at a Time.