Riding the Rails in Snoqualmie

A friend of mine named JG used to ride the rails. JG finished up his college years in a sleepy Midwestern town, then wondered what was next. His fellow students were settling into new lives in Chicago and Minneapolis, starting their climb from the bottom of the corporate ladder. But that wasn’t the life for JG. He had no money and he wanted to go west, so he went vagrant and started hopping freight trains. 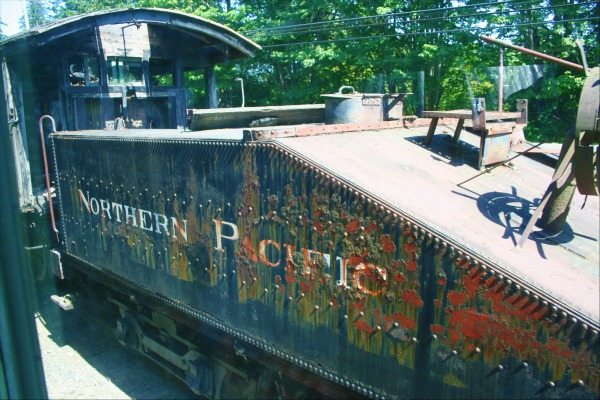 “I didn’t have a destination in mind,” JG told me. “I just wanted to travel, to keep moving, to shake the dust off my heels and see what was next. I was a younger man, and I had a younger man’s optimism and energy. Wherever the next train took me was home.”

Eventually, the all that train-hopping brought him right here to the Pacific Northwest, where he stayed.

I have to admit, I love it. Youthful vagrants hopping train cars in search of something intangible, full of hope and promise for what lies ahead for them in the next town. JG’s story took place twenty years ago, but that was by no means the end of new beginnings on the rails. A young cousin of mine is taking in the west on a freight car somewhere right now as I write this, making his way from Oakland to Santa Fe.

What is it about boys and their trains? 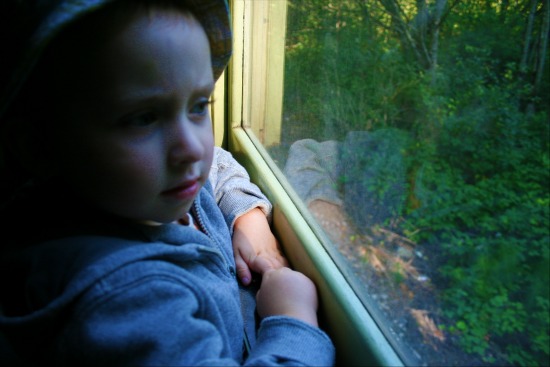 The town of Snoqualmie is home to the Northwest Railway Museum, which is kind of like a big candy store for train fanatics.  The museum owns and restores an impressive collection of passenger and freight cars, steam and internal combustion locomotives, and railway artifacts. We brought our own little train fanatic to ride the rails and climb in some engines. Basically, we were shamelessly fueling his adorable obsession with Thomas the Tank Engine.

The Upper Snoqualmie Valley began hosting passenger rail service in the summer of 1889. Our railway experience began as soon as we stepped over the tracks that run in front of the old Victorian depot, which now houses a gift shop, ticket window and the interior of the museum. Artifacts and interpretive visuals tell of the optimistic spirit that embodied the migration of settlers by rail to the Pacific Northwest more than a century ago. As I had hoped for, there’s a fascinating display about the Great Wellington Train disaster of 1910 in nearby Skykomish Valley. 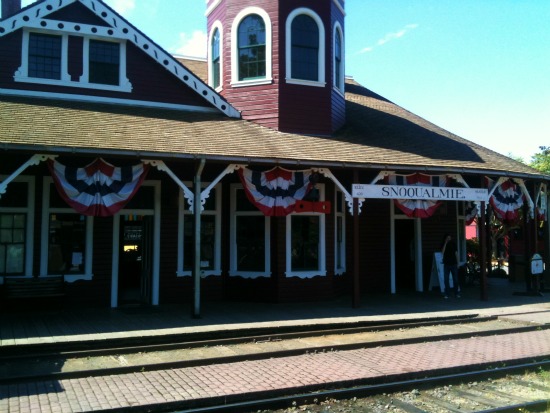 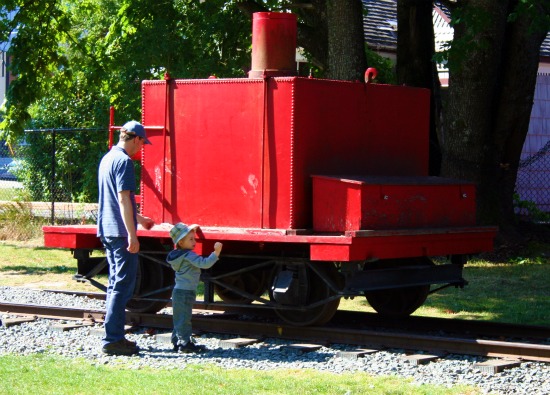 The Northwest Railway Museum operates a 75-minute train ride from Snoqualmie to North Bend, then back to view Snoqualmie Falls from above. Trains depart several times a day on Saturdays and Sundays from April through October. We paid $12 each for our adult tickets and $8 for our kiddo.

Like any train ride, you buy your ticket, and then you wait to board. 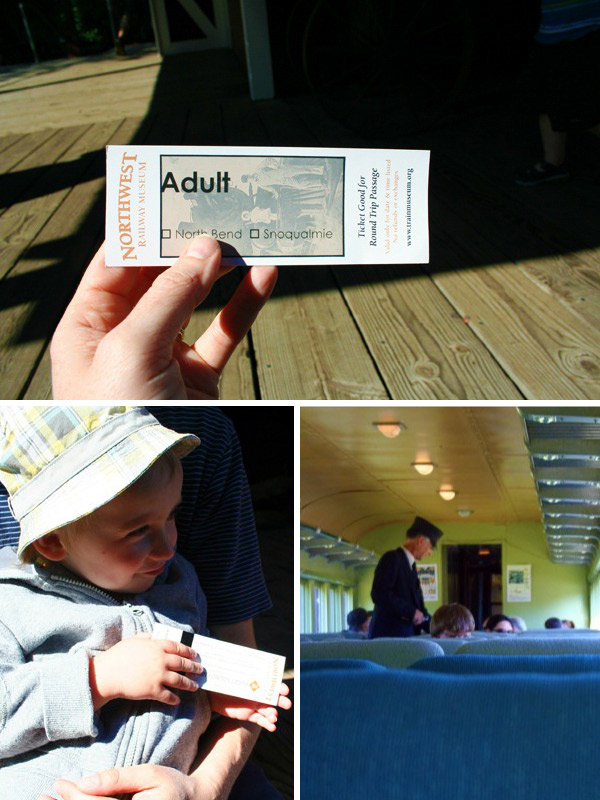 The day we rode the rails was sunny and slow. Only a handful of other families rode along. There were four passenger cars, all connected, all from different eras, and passengers were free to move from one to another as they wished.

My favorite was the modern-era car, pictured below with its spacious blue armchairs. The car was built as a coach in 1915 then radically remodeled in 1955 as a “combine” – a combination baggage-coach car. The SP&S railroad ran this car on its line from Wishram, Washington to Bend, Oregon.

SP&S stood for Spokane, Portland and Seattle, by the way. The Northwest’s own railroad was later taken over by Burlington Northern, which donated this particular car to the museum when Amtrak took over passenger trains in 1971. 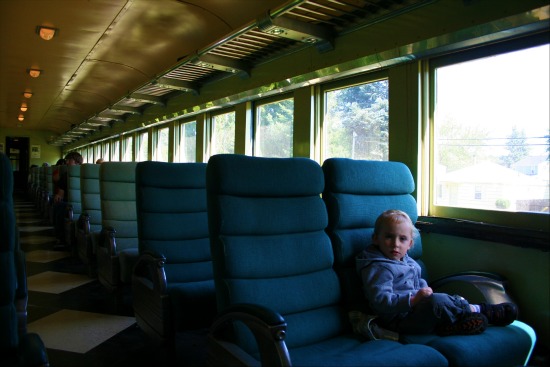 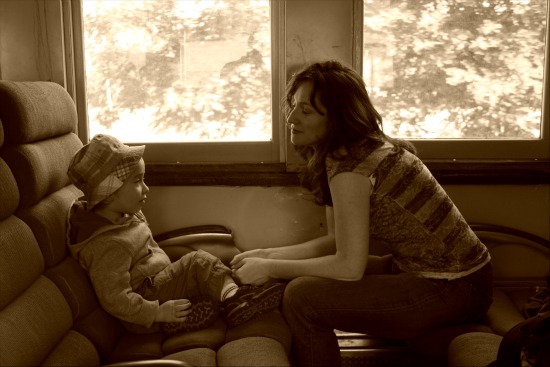 Not all of the coach cars were as comfortable. 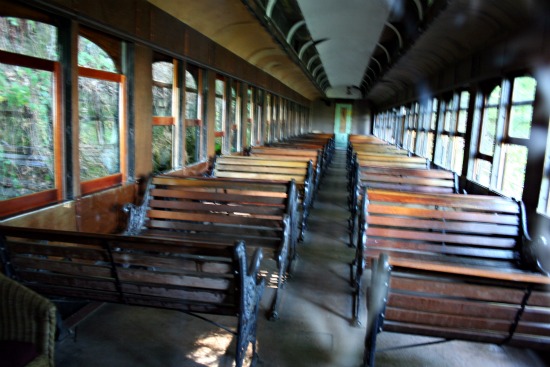 I liked living near tracks as a young kid and hearing train whistles at night. Then, in the fourth grade, our teacher showed my class this train safety video. It depicted a car of young reckless teenagers who tried to beat a train and lost. It warned that signals do not always work, and that cars should slow at tracks and watch for speeding trains that could come without warning. Why, why would anyone show a video like this to a fourth grader? But, they did. And for years after, I hated trains. I avoided train tracks. I worried about my parents driving over tracks on their way to work.

With the passage of time, I got over my train phobia.

At one point on our Snoqualmie train ride, our coach car was perched on a steep mountainside. We all gazed downward at the sheer dropoff out our windows. It would be a most inopportune time for an earthquake, I thought. But it was fun to perch on the edge of the earth like that. And then, as the train slowly pushed on, the dropoff was gone.

I asked my friend JG why he rode the rails.

“When I was a little boy, our house was a couple blocks from the train tracks. I would watch them pass and wave to the engineer. Late at night, they’d pass through town and the whistle would wake me up. Before I fell back asleep, I would think about all the places those trains were going, the big empty night ahead of it and the little towns set in all that darkness. I think trains, and their great and powerful loneliness became part of me very early. I still love them, and I’m sure that’s why I chose to train hop despite all the hassle and danger.”

My little boy, too, is into trains. I’m not sure how I will react, thought, if he graduates from college and decides his next adventure is to ride the rails around the West. He’s only three now. I guess we’ll cross that track when we come to it.