Fishermen were lined up like the poles they held in their hands, neatly spaced apart along the shoreline. I was at Lincoln Park’s Point Williams in West Seattle, a stone’s throw from my house. Some chatter on twitter about a passing pod of orca whales is what coaxed me here on a Friday morning. The whales had just passed, I was told, maybe 20 minutes prior. Five of them, one a baby, frolicking just 30 yards from shore. We’d just missed them.

So we watched them fish. 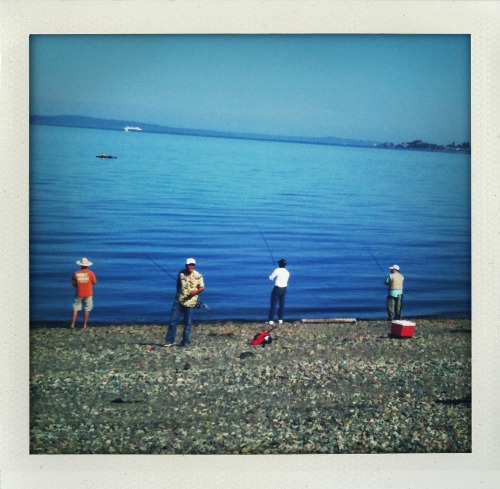 Pink salmon are running right now, a run that comes every two years, and this year the fishing is prolific. About six million pink are returning to the waters of Puget Sound to spawn this year. One woman I spoke with told me they’d been at it since 5:30am. “I counted 70 people lined up fishing here just a few hours ago,” she said. I looked at my watch. It was just 10am.

A few official-looking types were walking around talking with people. Park rangers, I thought, or officers with the Washington Department of Fish and Wildlife.

The folks fishing were as diverse as could be. Most of them were men. Some wore waders, and some were in fancy angling clothes. Most were in shorts or jeans and floppy hats. The sun was heating up the day, and there was little breeze to speak of. Red and blue coolers and tackle boxes dotted the rocky point.

Each time a silvery salmon was reeled in, everyone would cheer. 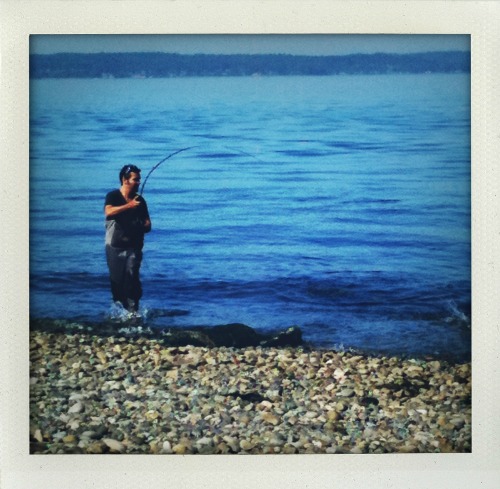 One of the fishermen, Arie, was having a very lucky day. Well, sort of. At just 10:30am, he hit his daily limit, reeling in his last pink salmon. It was a beautiful pink, and the assembled fishermen nearby let out a cheer. 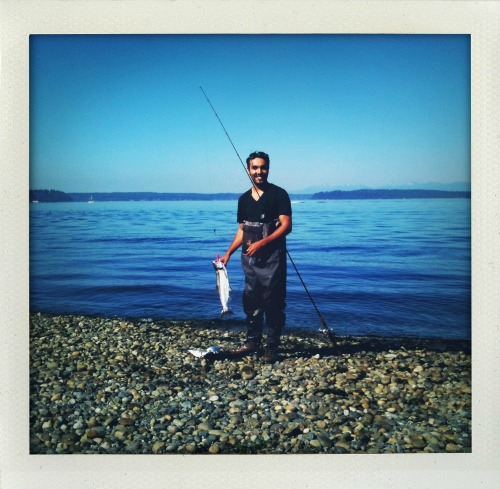 The bummer for Arie was that he’d gotten a fine earlier in the day for not marking his catch on his card right away. It was a whopping $160. At that rate, each of those fish cost him about $40.

I grew up fishing, and would love to teach Isaac to fish. Maybe we’ll go and get a pole and a license. A combination freshwater and saltwater fishing license for me would cost about $46, and for Isaac about $9. The regulations beyond that, though, are a bit dizzying. The real challenge begins when you catch a fish. What is it? How big is the fish? Hatchery or wild? Which beach am I fishing from? Wild coho and chum have to be thrown back. Wild chinook, of course, are protected under the Endangered Species Act and must be released. Hatchery chinook, marked with a clipped adipose fin, can be kept, but only two per day.

Perhaps after I spend some time with this WDFW fishing pamphlet and its 6-point font, I will feel confident enough to give it a try.

Because damn, it sure looks fun, not to mention tasty.

What about you? Will you be out catching some wild pink salmon on this beautiful weekend? 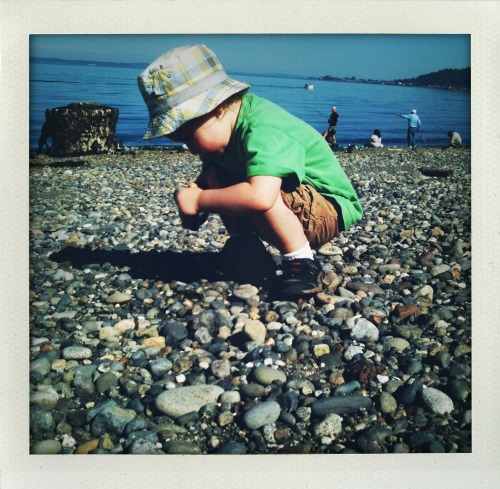