I’m a bit inclined to get stuck in ruts, from the cars I like to drive (old Volvo station wagons), to the campgrounds I prefer (tent sites near wilderness) to the toppings on my pizza (pineapple and hot peppers). And that’s usually okay because really, change is over-rated.   But one kind of change is not over-rated: climate change. Our record-hot […]

At Silver Falls State Park, you’re in the best of both worlds–a stone’s throw from Willamette Valley wine country, and inching up the west slope of the Oregon Cascades. And by “cascades” we mean mountains… and waterfalls. Lots of waterfalls. We are spoiled rotten. In the Pacific Northwest where huge swaths of land are protected […]

Dear TripFinder, Q: Any suggestions for vacation rental sites for large cabins around Mt. Hood?  – Adina from Seattle    Dear Adina, Many of our Northwest mountain communities have cabins that are second homes, and owners often rent these out as vacation rentals when they aren’t using them. Around ski areas, it’s not uncommon to find […]

Who says “camping” can’t be comfortable? Here are a bunch of affordable rustic retreats in Washington state, all managed by public land agencies. Some are light-filled yurts near a beach, while others are historic cabins in the woods. All are rent-able year-round. They’re even heated in colder months so you can stay toasty warm while you’re inside […]

State Park Cabins in Oregon, from Rustic to Deluxe 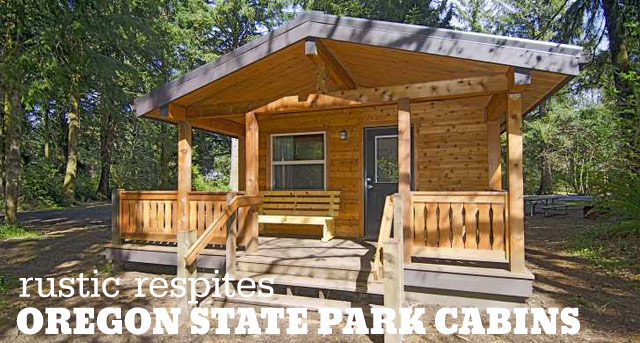 Picture this. After an unexpectedly chilly night spent sleeping on the hard, bumpy ground at a local state park, you skip your morning shower (too cold!) only to get rained on from the sky while eating instant oatmeal, shivering in your gortex. It’s car camping in the Northwest! And if you’ve had an overnight experience […]

Quiet ranching area approximately 3 miles from the towns of Joseph and Enterprise, Oregon.

Cozy Cabins on a Budget at Grace Haven

I have cabin fever. No, not that kind-the other kind. The kind where you’re crazy for cabins.  I’m crazy for cabins – cedar walls, steaming cups of cocoa, cozy fires, wool blankets. Love them.  First, I told you about staying at my friend’s cabin in Winthrop. But we couldn’t stop there. No, there was another. […]

I grew up in the Midwest. Illinois, to be precise. In Illinois, we had cornfields and soybeans. To the north up in Wisconsin and Minnesota, though, were big trees, lakes and… cabins. On occasion, I’d know someone whose cousin’s girlfriend’s grandparents owned one of those lakefront cabins, and up we’d go to relax a little, […]

My overall impression of the cabins at Cama Beach State Park? They live up to the hype. This is an incredible escape during the off-season months.