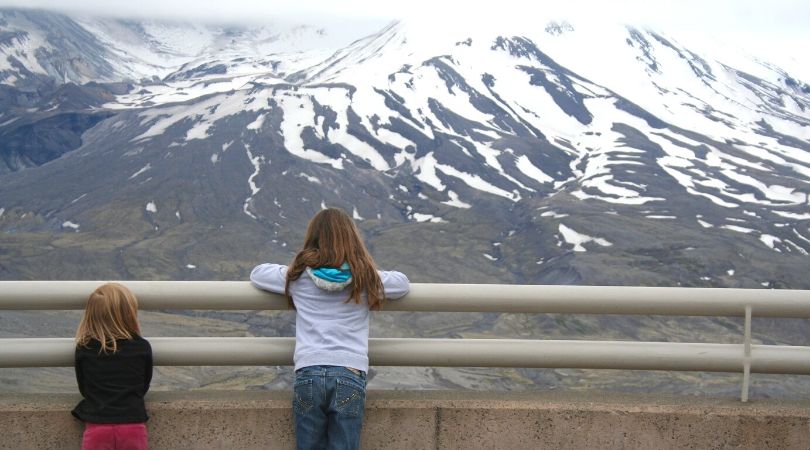 Forty years ago, at 8:32am on a quiet Sunday morning, Mount St. Helens blew its top.

The explosion was a massive volcanic eruption, the most disastrous in U.S. history. A plume of searing hot ash spewed hundreds of feet into the air that turned day into night around the Pacific Northwest. The unexpected lateral blast triggered a landslide down the north slope of the mountain, immediately followed by a pyroclastic flow of volcanic gas, ash and pumice that accelerated to around 670 mph and mowed down anything and everything in its path. Falling ash in the blast zone blanketed 230 sq miles. In all, 57 people were killed, along with millions of birds, deer, squirrels and other wildlife.  A gaping crater memorialized the blast, looming over a denuded moonscape with trees toppled like toothpicks, the ground singed to a crisp, and plant and animal life erased.

As with so many things in nature, death begets life. Four decades after the eruption, signs of its geologic catastrophe remain everywhere in the blast zone, but so does new life in myriad forms. Hiking the trails on and around Mount St. Helens National Volcanic Monument is like stepping into an outdoor classroom, where geologic forces of the past teach us about nature’s recovery and renewal in the present and future. The 40th anniversary of the 1980 eruption is a wonderful year to explore the volcano’s pumice hills and flowered slopes. 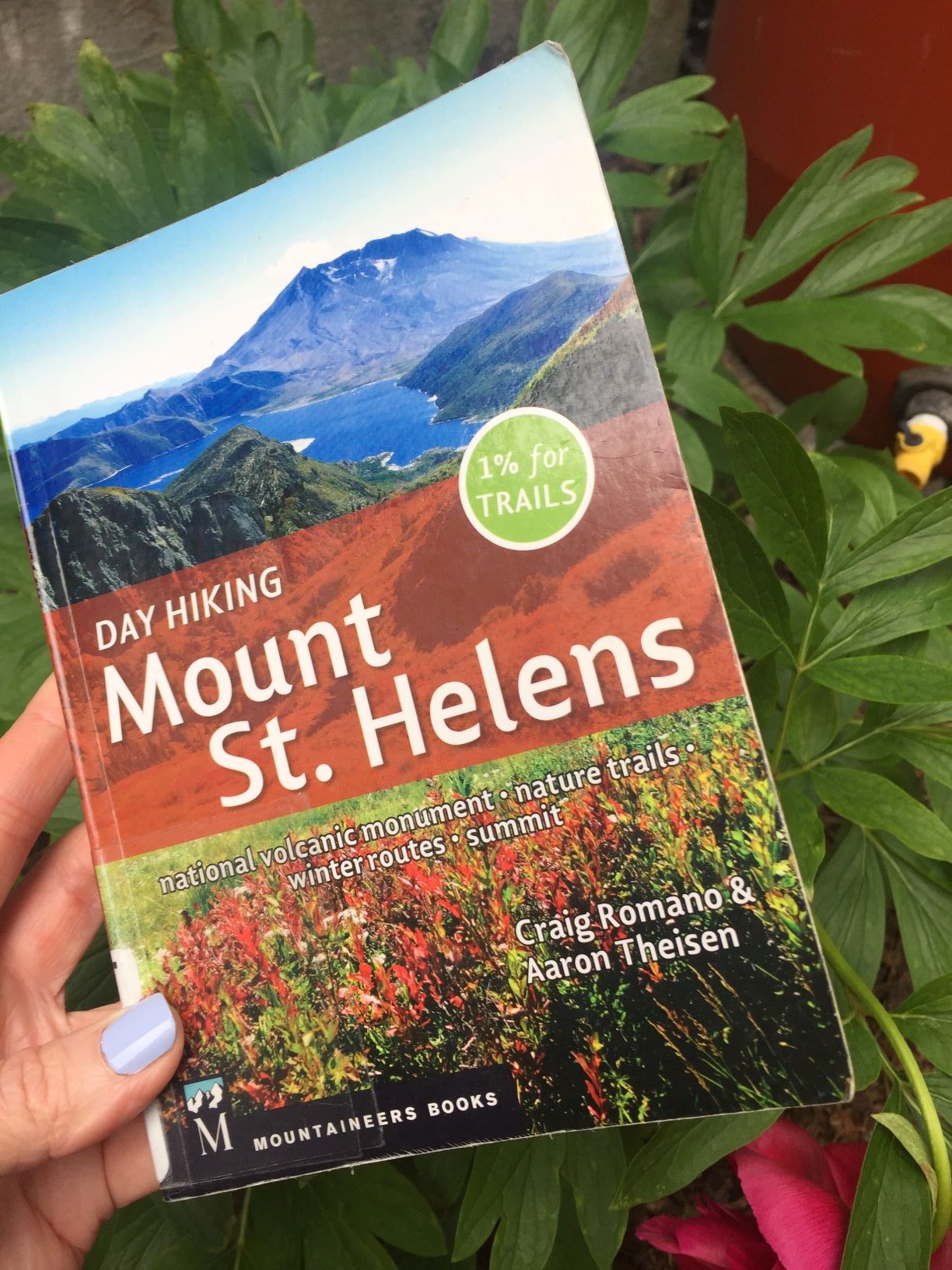 NOTE: the most popular area of Mount St Helens National Volcanic Monument, SR 504 (Spirit Lake Memorial Hwy) and the Johnson Ridge Observatory and Visitors Center, are *currently still closed due to the COVID-19 crisis.  This area is expected to re-open with recreation safety guidelines in place soon, so plan your trip sometime from June to September.

Below are my top trails for experiencing Mount St. Helens in a weekend. Be sure to check out all the great resources at the end; many organizations had planned educational events, hikes and more around the eruption anniversary that have moved online.

The monument offers three different approaches to the volcano — from the west, east and south sides. The west approach is an out-and-back from I-5. The east and south approaches connect with one another in summer months over Elk Pass via FR 25, and can easily be combined on the same trip. All of these hikes below and about eighty more can be found in the indispensable guidebook to this area, DAY HIKING: Mount St. Helens, by Craig Romano and Aaron Theisen. Always hike with the ten essentials and check WTA’s Trip Reports for your chosen trail before you head out. A Northwest Forest Pass is required to park at trailheads in the monument. 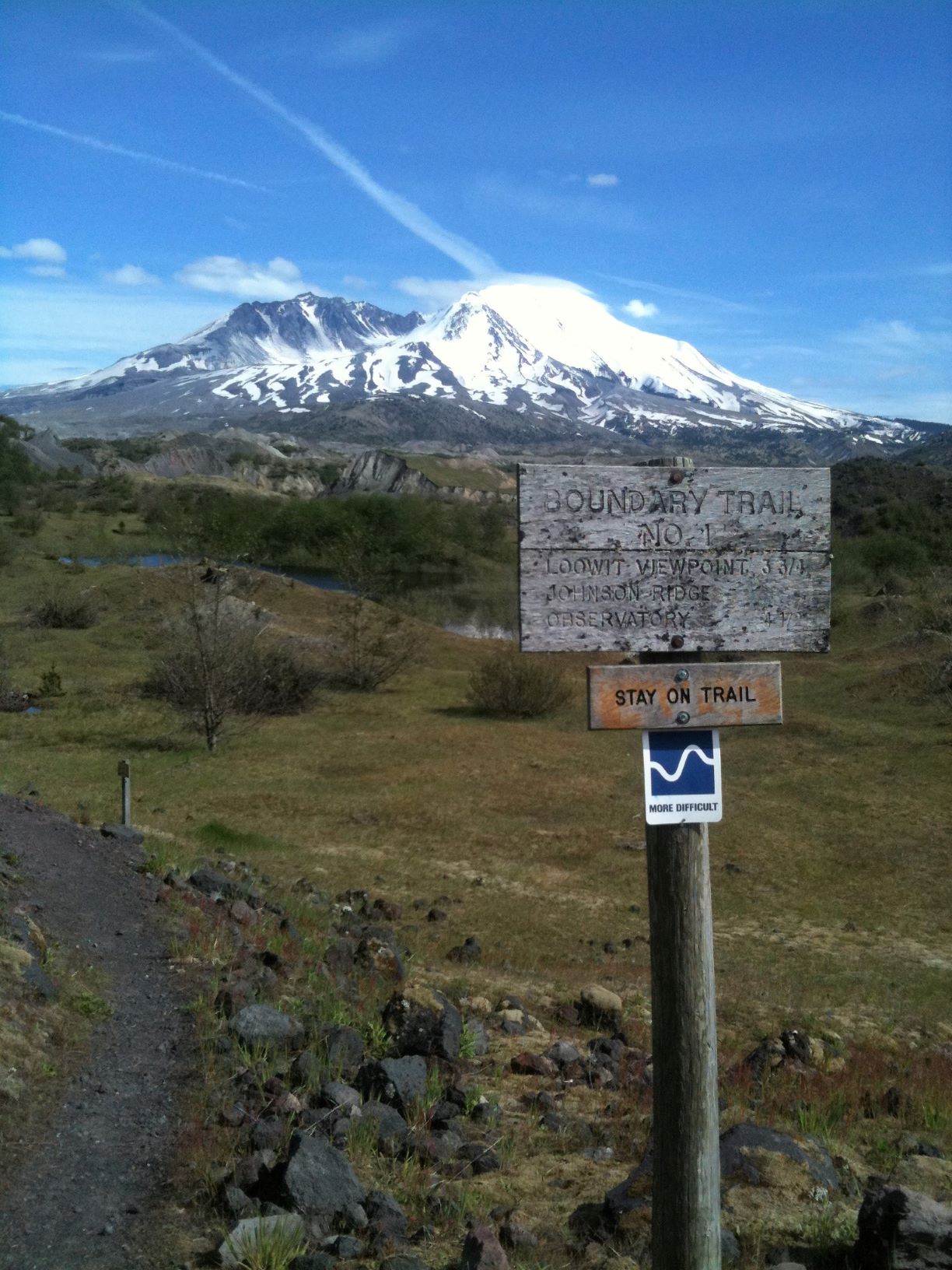 The most popular approach is from the west via the 52-mile Spirit lake highway (State Route 504, currently closed), which starts at the Mount St. Helens Visitor Center at Silver Lake and ends at the Johnston Ridge Observatory and an overlook with a view directly into the volcano’s gaping crater. If you want to immerse yourself in the blast zone and the 1980 eruption and you’re short on time, this the best area to spend it. I prefer to first drive to the observatory and spend some time hiking around there, then backtrack down SR 504, following the path of the lahar along South Coldwater Creek, Hoffstadt Creek and the North Fork Toutle River.

From the observatory, interpretive kiosks guide you through the blast along the paved Eruption Trail (.6 miles RT, scant elevation gain) with 360-degree views of Mount St. Helens and the surrounding blast zone. The young USGS geologist David A. Johnson was camped here while observing the volcano the morning of the blast that killed him; the ridge and observatory are named in his memory.  After your short hike, stop inside the observatory for interactive displays, films and ranger talks through which you’ll learn all about the geological story of the eruption (open 10am-6pm daily from mid-May through October, $8/adult, kids free).

At the south end of Coldwater Lake is the Hummocks Trail (2.5 miles RT, 250 ft gain), a fascinating landscape of unusual mounds of earth that were deposited by the landslide. Stands of alder grow here now atop an undergrowth of wildflower species like fireweed and lupine that thrive in recently-disturbed landscapes.  The interpretive trail skirts around marshy ponds and along a creek (keep an eye out for beaver and mink), the air around you buzzing with dragonflies and warblers in springtime.

On the volcano’s south side (via Hwy 503), you can “hike” right into the underground world of a real lava tube at Ape Cave (currently closed) (1.5 miles RT for the lower tube, 2.5 miles RT for the upper tube, 360 feet gain). Honestly, for much of this traverse you’ll be scampering and crawling, not hiking, but it’s a unique adventure and worth the effort. You’ll need bright headlamps (pack extra batteries) to enjoy the “scenery” though – it’s completely dark throughout the cave. This lava tube is a natural tunnel below the earth’s surface through which lava once traveled during an eruption about 2000 years ago when fluid basaltic lava poured down the southern flank of the volcano. The path is rough in places so good boots and sturdy gloves (leather work gloves are best) make the scrambling more comfortable. Dress in layers as the lava tube is 42 degrees year-round, and may be wet.

For a longer, beautiful hike you can do as an overnight backpack, head to the Sheep Canyon trail (12.2 miles RT, 2645 elevation gain). This lahar-scoured canyon is the result of a mud flow from the 1980 eruption. The trail traverses through old-growth fir and cedar forest, across rushing streams, alongside a mountain lake and through carpets of wildflowers, all with periodic views of the southwest side of the volcano.

To reach the east side of Mount St. Helens, you’ll head south on SR 131 (which soon becomes FR 25) from the town of Randle, which has a few inns for overnight stays and makes a good base for exploring this side of the mountain (as well as the Ohanapecosh region of Mount Rainier).

Independence Ridge (2.6 miles RT, minimal elevation gain) is a short, sweet hike with  stunning overlook views of Spirit Lake, which was displaced by the lateral blast eruption in 1980, and views of Mt. Adams to the east.

You’ll want to bring your best camera on Harmony Falls (2.4 miles RT, 650 feet gain), the only hike that gets you on the shoreline of Spirit Lake with Mount St. Helens looming just across it. The falls that were here prior to the eruption are gone, this landscape now dramatically altered as mud flows and logs damned the lake’s outlet, rising the water level more than 250 feet. 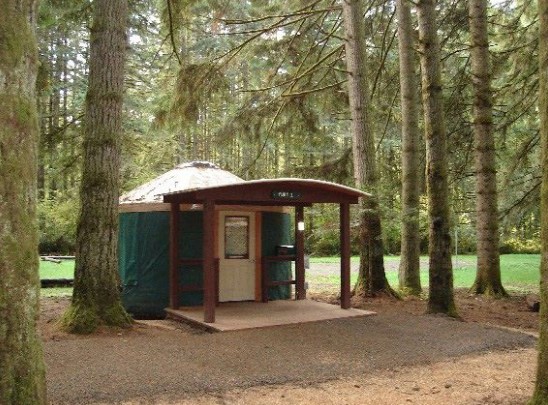 Where to Camp, Stay, Eat

You won’t find a campground in Mount St. Helens National Volcanic Monument, but there are a few campgrounds in the surrounding Gifford Pinchot National Forest and a state park outside the monument boundary.

On the west side, book a campsite or one of the five yurts at Seaquest State Park which is connected to the Silver Lake Mount St. Helens Visitor Center on SR 504 and has nice views of the volcano. In addition to the yurts there are 52 standard campsites, 18 partial-hookup sites, and 15 full-hookups sites.

Iron Creek Campground south of Randle is a national forest campground that accepts advanced reservations. The campground has 98 campsites on a flat along the Cispus River, set among old growth Douglas fir, Hemlock, and Cedar. Reserve online or call 1-877-444-6777. Camping is $20/night. 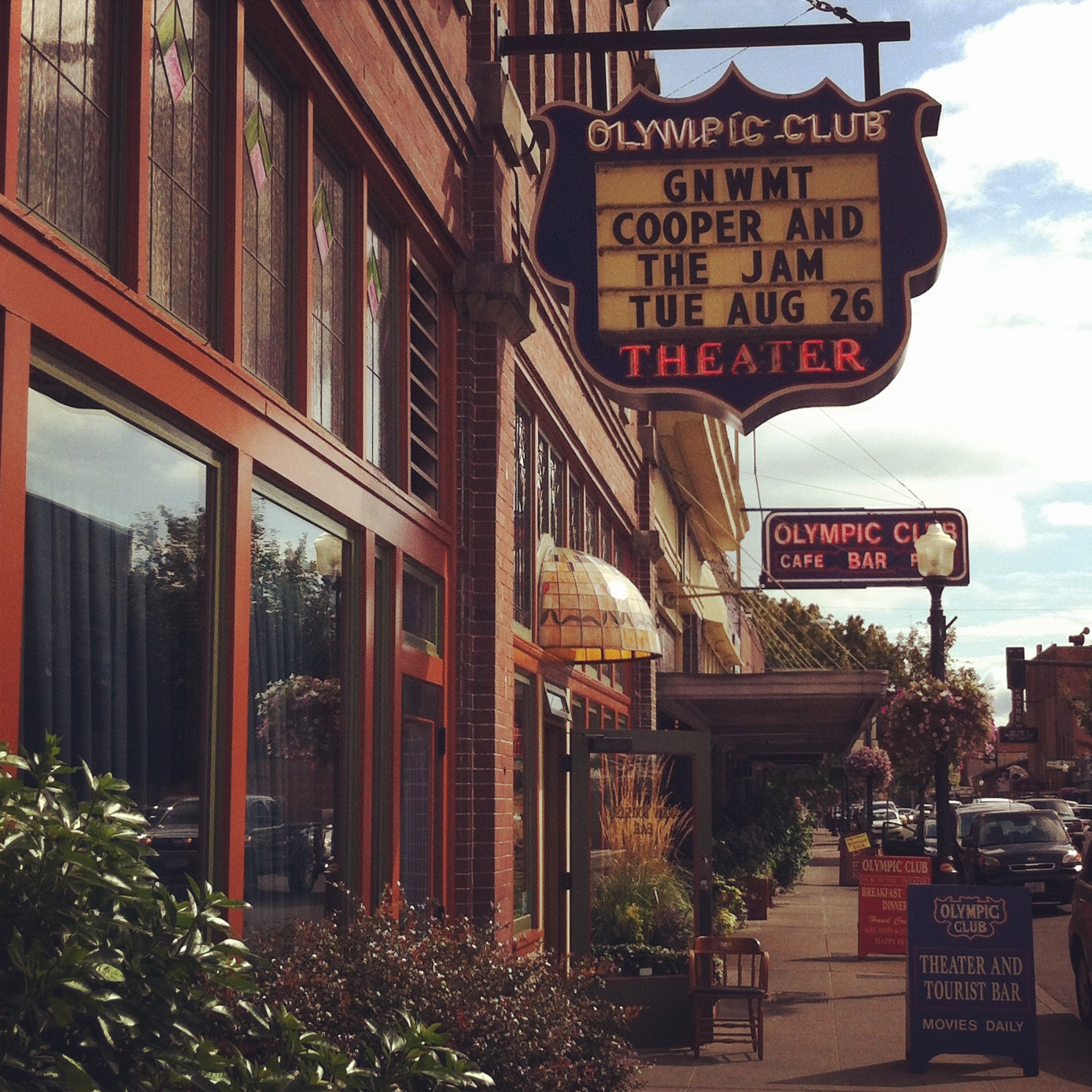 In Centralia, McMenamins Olympic Club has very affordable rooms with shared baths in a vintage brick downtown hotel where the only drawback is the well-used train tracks (or rather, the trains that ride on them) right behind the hotel, though a pair of earplugs take care of that problem if you’re not one of those people who love the sound of a very close train passing at night. The McMenamins pub downstairs is reliably great for burgers, cajunized tater tots, loaded nachos and of course, craft beer. And if you like shopping for antiques, Centralia is your town!

If you find yourself famished on SR 504, stop by Fire Mountain Grill (9440 Spirit Lake Hwy, Toutle) for a (hot! spicy!) volcano burger, a basket of coconut prawns, or deep-fried pickles! Dessert is their locally-famous mountain berry cobbler with vanilla ice cream.

If you’ve got the cash, Evergreen Escapes hosts an excellent naturalist-guided one-day trip to the west side of Mount St. Helens (the blast zone) in a luxury van and it includes a delicious picnic lunch with local food and wine. I went on their one-day tour of St. Helens a few years ago and highly recommend it. 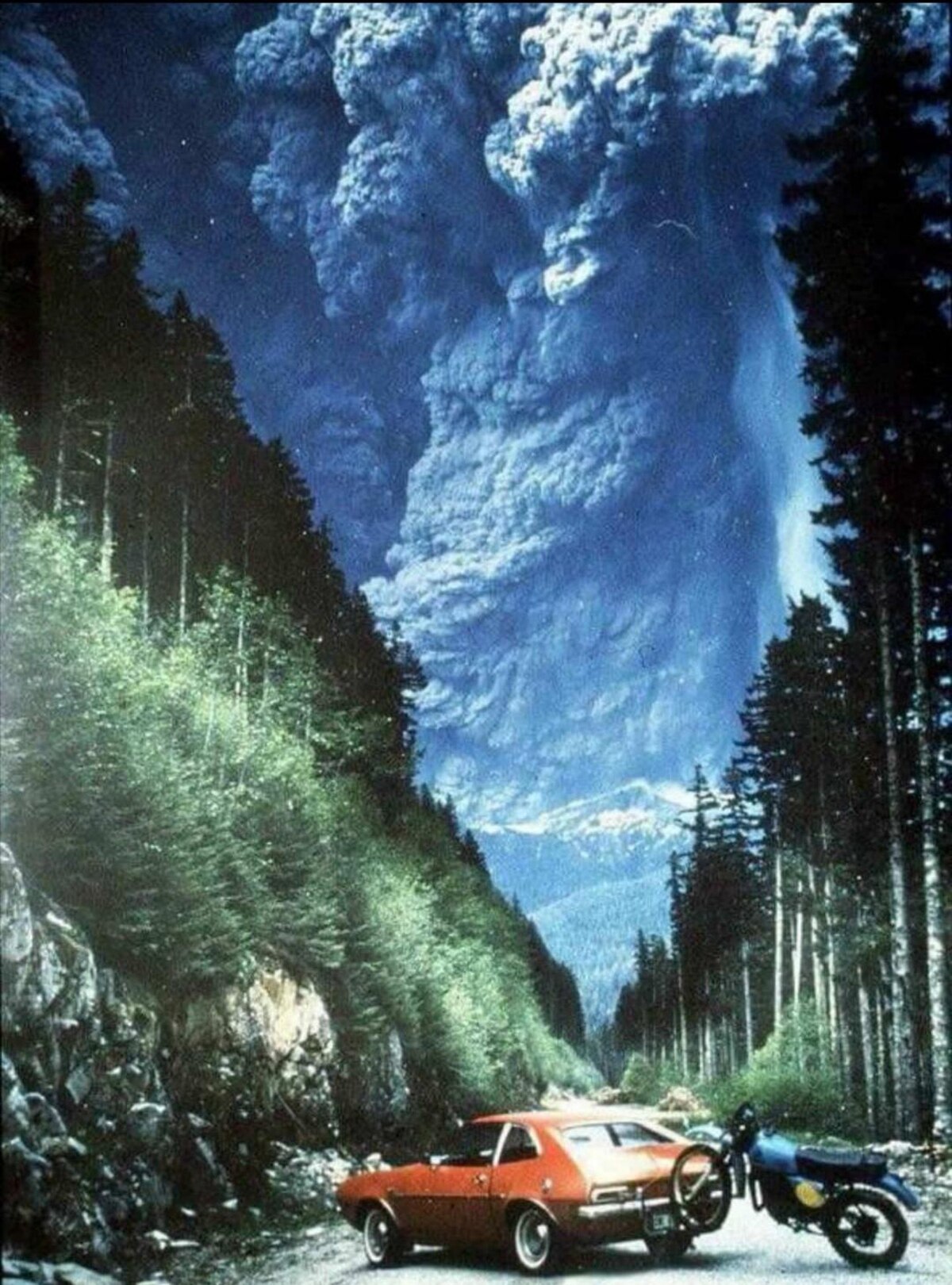 The Gifford Pinchot national forest along with many organizations had planned educational events, hikes and more around the 40th anniversary of the eruption this year. Because of the coronavirus, the celebration (for now) has moved online.

Ranger Anna made this video explaining the lateral blast.

Seattle’s KOMO News has their real-time media coverage from the 1980 eruption here.

The US Army Corp made a series of videos about the eruption.

Check out the Smithsonian Institute’s volcanism program’s info and videos.

photos: all photos mine except the yurt, which is courtesy of Seaquest State Park, and the iconic pic of St. Helens erupting with the Pinto in the foreground, which hangs in the Johnston Ridge Observatory and is credited to Richard Lasher, a Boeing employee at the Frederickson plant who was on his way to ride his dirt bike around Spirit Lake when the mountain blew up in front of him.