Visit Poulsbo for a little slice of Norway, the freshest seafood and charming waterfront shops. 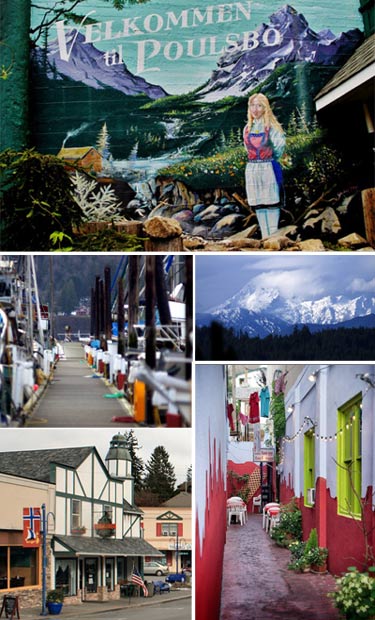 Velkommen Til Poulsbo! It all started back in 1883 when a Norwegian named Jorgen Eliason rowed across Puget Sound from Seattle and found a spot that reminded him of the scenery of his homeland, with fjord-like inlets backdropped by jagged peaks. More Norwegians soon followed and their settlement became known as Poulsbo, a scenic seaside community of Scandinavian loggers, farmers and fishermen. Although Poulsbo’s branding as “Little Norway” was born out of the same tourism brain trust in the 1960s that put the Bavarian in Leavenworth, Poulsbo’s Scandanavian roots are the real deal.

Set on the shores of Liberty Bay with a sailboat-filled marina, Poulsbo is as picturesque as Puget Sound villages come.

This easy day trip from Seattle is even better as an overnight getaway; choose from several area bed and breakfasts and inns. 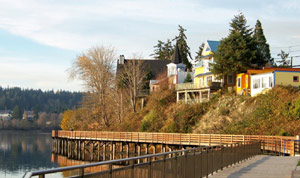 From Seattle, board a Washington State Ferry from the downtown ferry terminal to Bainbridge Island; the crossing is approximately 30 minutes. You will need your car for this trip. Once across, you’ll exit the ferry and stay straight, driving onto Hwy 305, which crosses Bainbridge Island and then takes a small bridge onto the Kitsap Peninsula. Stay on Hwy 305 until you come to Poulsbo, approximately 12 miles from the ferry dock on Bainbridge Island. If you’re coming from the south, cross the Tacoma Narrows Bridge on Hwy 16 and head north to Hwy 3 until you see the exit for Poulsbo.

Visit Point No Point at the Kitsap Peninsula’s tip to check out the first lighthouse built on Puget Sound. Take a short hike with a big view on the beach at Kitsap Memorial State Park. Time your trip for the farm-fresh “First Saturday of the month breakfast” at Farm Kitchen north of Poulsbo.

A Visit to the Beautiful Point no Point Lighthouse, youdidwhatwithyourweiner.com