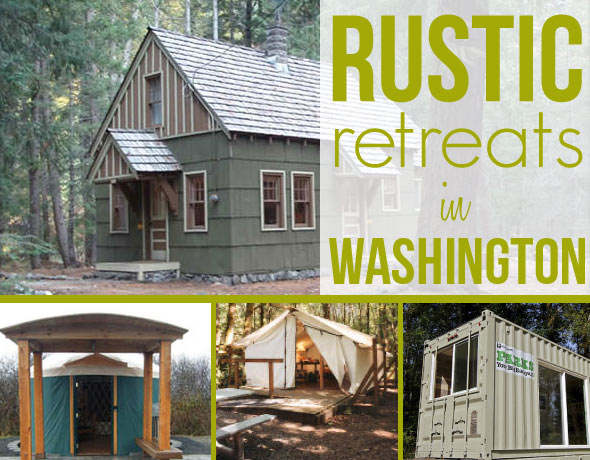 Who says “camping” can’t be comfortable? Here are a bunch of affordable rustic retreats in Washington state, all managed by public land agencies. Some are light-filled yurts near a beach, while others are historic cabins in the woods. All are rent-able year-round. They’re even heated in colder months so you can stay toasty warm while you’re inside and enjoy the crisp winter air and nature all around you while you’re outside.

For Oregon, see State Park Cabins in Oregon, from Rustic to Deluxe.

Check the amenities for each of these carefully so you’ll know what to pack. All of these require you to bring your own bed linens and blankets. Most all of these will have a fire ring outside, should you want a campfire, but you’ll need to bring your own wood. Some of these units have indoor kitchenettes, others require you to bring a propane stove or crockpot if you want to cook beyond the campfire. A few of these have no potable water onsite in winter, so you’ll have to pack it in. Every single one of them is surrounded by natural beauty, so you absolutely must bring a camera. 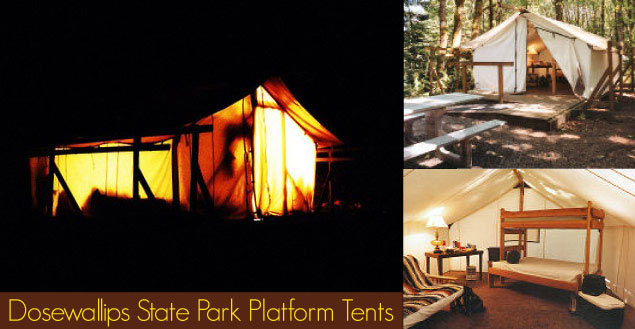 Imagine you are a family of early pioneers camped near the shores of Hood Canal in one of the white canvas wooden platform tents at Dosewallips State Park. Dosewallips is a favorite park for families with small children because of its variety with both forested trails and saltwater beaches. Each of the three modern platform tents set in a maple forest is 14-by-16 feet inside and comfortably sleeps five people. Inside is a bunk that sleeps three, a futon for two, electric lights, a table and a heater. Outside you’ll enjoy a deck, picnic table, fire grill and utility hookup. Walk to shared bathrooms and showers nearby. You’ll need to bring your own bed linens for the platform tents, as well as extra blankets and clothes for winter weather.

Got clams? Dosewallips tidelands are famous for clams and oysters, and on a recent trip here my family enjoyed digging for littlenecks at low tide them steaming them up back at camp. You can pick up a bucket, shovel and shellfish harvesting permit just north of the park in Brinnon at the general store.

Details: You can reserve the platform tents year-round online or by calling 1-888-226-7688. Up to five people per platform tent. Off-season nightly rental fees for the platform tents are as low as $40, peak season is $59. Dosewallips State Park also rents three cabins and one rustic bunkhouse. 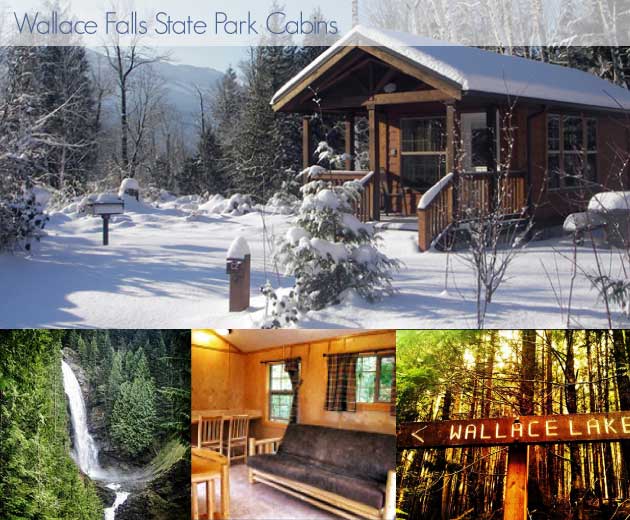 How do you like the idea of taking a morning walk to a 265-foot plunging waterfall? After a night in one of the cozy, private cabins at Wallace Falls State Park you can do just that. The five cabins (one is pet-friendly) are nestled within the park’s 4,000 lush acres of forest along the shores of the Wallace River. Each cabin has electric heat and light, and locking doors. Inside are bunk beds that sleep three and a full-size futon bed for two. Outside is a 6-foot covered front porch, picnic table, fire pit and barbecue stand. The park has trails for every level – flat interpretive nature trails through woodland, short trails to three waterfalls, and a longer, more challenging trail to Wallace Lake that was built by teenagers through the Washington Trails Association.

This small park is just 58 acres in size, but it has big views of Hood Canal and about 1,800 feet of shoreline to explore. And one of these cute cabins at Kitsap Memorial State Park would make a nice base for visiting the “Little Norway” town of Poulsbo just a few miles to the south. Small kids will love the park’s grassy playfields and playground equipment. Parents will love a romantic stroll on the beach while the kids look for starfish in tide pools.

The cabins at Kitsap Memorial are a bit less rustic that other state park rentals because they include kitchenettes with mini refrigerators and microwaves. The cabins are cozy (13-by-13 feet) and are simply furnished with a bunk bed that sleeps three and a futon that sleeps two. Enjoy electric heat and lights. Each cabin is accessible to people with disabilities. Bathrooms and showers are a short walk away. A fire pit and picnic table are just outside your door. Bring extra blankets to stay warm while lounging outside. 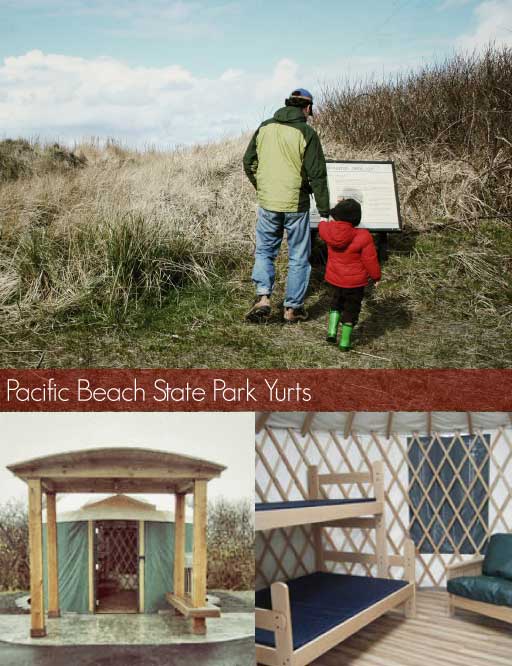 Pacific Beach State Park is on the North Beach, a remote stretch of coastline that lies to the north of Ocean Shores and is popular for razor clamming, beachcombing, kite-flying and storm-watching. No one wants to watch a storm from their tent, but the yurts at Pacific Beach are a perfect refuge on blustery days. The two yurts are within walking distance to the beach. Each yurt is 16 feet in diameter and is simply furnished with bunk beds that sleep three, a full-size futon and a small end table. There’s one overhead light, but the yurt has an electrical outlet so you could bring your own small lamp for softer lighting in the evening. The yurts have heaters. Outside you’ll find a picnic table and small covered porch. Both the yurts and nearby bathrooms are accessible to those with disabilities. Showers are a short walk away.

Details: Up to five people per yurt, and this park has just two yurts. Reserve online. Fees are $49-74 nightly.

Stay in a Shipping Container at Tolt MacDonald Park, Carnation 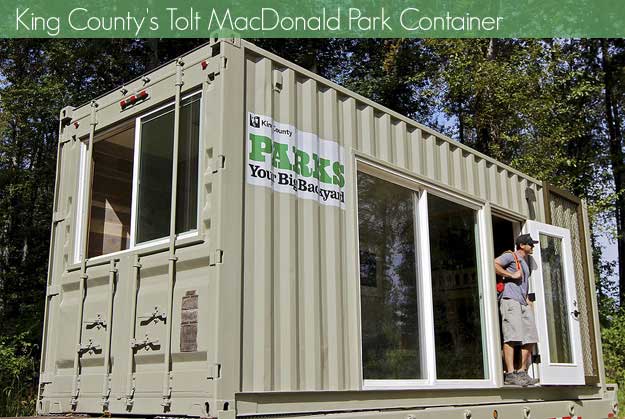 A local county park near Seattle has taken the modern trend of  re-purposing shipping containers into dwellings to the campground. King County’s Tolt MacDonald Park in Carnation has just added a refurbished shipping container to its popular campsite (they also have these yurts.)  How cool is that?

Kids in particular will love sleeping in their very own shipping container-turned-camping vessel set on the shores of the Tolt and Snoqualmie rivers. There’s only one camping container so far, and it features a full-sized bunk bed, table and multi-purpose cabinet made from reclaimed materials. Other signs of sustainability include old soccer goals that were converted into a green wall and an old door that is now the kitchen table.

Details: For more information visit Tolt MacDonald Park online, or call (206) 205-5434 to make reservations for the camping container or yurts. The cargo container can be reserved up to one year in advance with at least one week notice. Cost for an overnight stay is $50.

On an historic orchard homestead in Snohomish County sits six yurts, offering a cool opportunity for family recreation in the Snohomish County Parks system.  The Yurt Village at River Meadows Park was erected on the orchard portion of the original McCaulley homestead, and some of the fruit trees (apples, plums, cherries) are still growing between the yurts. The yurts here range in size and one unit with a premium view sleeps 8. The restroom is close by and has private showers.

Details: Weekends require a minimum Friday and Saturday night stay. Yurts start at $55 per night. Reservations cannot be made more than nine months (or less than 72 hours) in advance of check-in. Reserve online. Alcohol and pets are prohibited in the yurts and in the village. 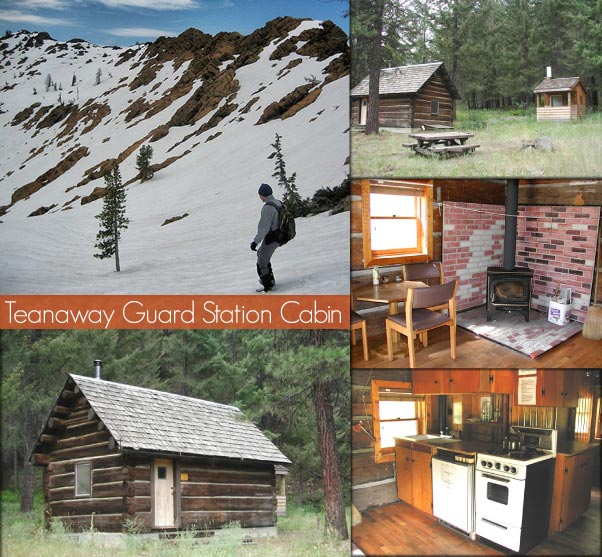 Ready for a really rustic adventure? Washington’s Teanaway region lies east of Snoqualmie Pass and is a particularly popular destination for recreationists because of it’s wide river valleys and stunning snow-capped peaks. In winter, the road is cleared to within 2.2 miles of the Teanaway Guard Station cabin, and it’s an easy ski or snowshoe trip over a groomed snowmobile route from there. Just pack up all of your gear into backpacks or pull it on a sled.

The rustic 12×18-foot log cabin can sleep two people on a set of bunk beds with mattresses. Other amenities include table and chairs, a Coleman propane cook stove and a propane lantern. The stove must be taken outside for use. No stove or open flames are allowed in the cabin.

A wood stove heats the cabin; however, wood is only supplied in the winter and must be split. An axe, splitting maul and wedge are available for guest use. A snow shovel is provided. A picnic table, fire pit and vault toilet are located outdoors. There is no water or electricity available at the site. Guests must bring water for drinking, cooking and washing. Water can be taken from the Teanaway River, but must be treated before drinking. Fuel is not provided for the propane stove or lantern. Guests must bring their own 16.4-ounce propane canisters, as well as cooking utensils, cookware, backup lighting, sleeping bags, towels, dish soap, matches, toilet paper and garbage bags. All trash and food must be packed out, and guests are expected to clean the cabin before leaving.

This cozy cabin was originally constructed in 1950 by a local miner. The Forest Service acquired the cabin in 1978 and moved it to its present location where it was used as a fire guard station. Now, it’s available for rent almost year-round (early May through mid-November and mid-December through early April.)

Details: $40 per night per group, with a maximum of only two occupants. Mid-December through early April, parking is 2.2 miles from the cabin, and the road and parking area are plowed by road crews. Reserve online. 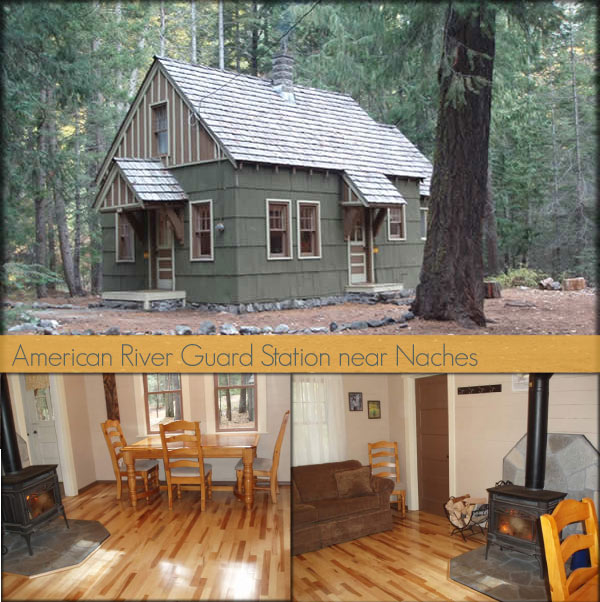 The CCC did it again! Way back in 1941, the Camp Naches Civilian Conservation Corps crew built this Depression-era rustic cabin with little idea that it would be enjoyed by generations of nature-loving families for many decades to come. The cabin was placed on the National Register of Historic Places in 1999.

You’re right on the edge of the William O. Douglas Wilderness here, a beautiful and lightly-visited part of the Central Cascades just east of Mount Rainier. Access to this cabin in winter months is via 410 from the Naches / Yakima area because Chinook Pass is closed. The route is kept plowed.

This wood-framed cabin has a shake roof and sits one and a half stories tall. It was refurbished and freshly painted in recent years. Inside is a small kitchen, a living/sleeping area, and a bedroom, as well as a full sized sleeping loft and storage room. There’s electricity and heat inside, but the nicely-restored outhouse is outside. Amenities include a small refrigerator, electric range, a dining table and chairs for four people (with hidden leaf to expand for eight people), a queen size sleeper sofa in the living room, a full size bed and mattress in the bedroom, two twin size beds in the upstairs loft, a wood stove, light fixtures and a living room electric baseboard heater. The kitchen is well-equipped with things you’ll need to whip up a meal like a coffee maker, pots, dishes and glassware. Just outside is a picnic table and fire ring.

Details: No potable water at the cabin so bring plenty for drinking, cooking and washing. (In the summer, drinking water can be obtained from the nearby Cedar Spring Campground.) Visitors must pack out their own garbage in winter. Available year round, and pets are allowed. The rate is $50 per night, per group, with a maximum of eight occupants. More info here. Reserve at 1-877-444-6777 or online.

photo credits: photos of cabins are courtesy of the land management agencies except Dosewallips platform tent at night by shirtnpants,  Teanaway snowfield by cascadehiker.