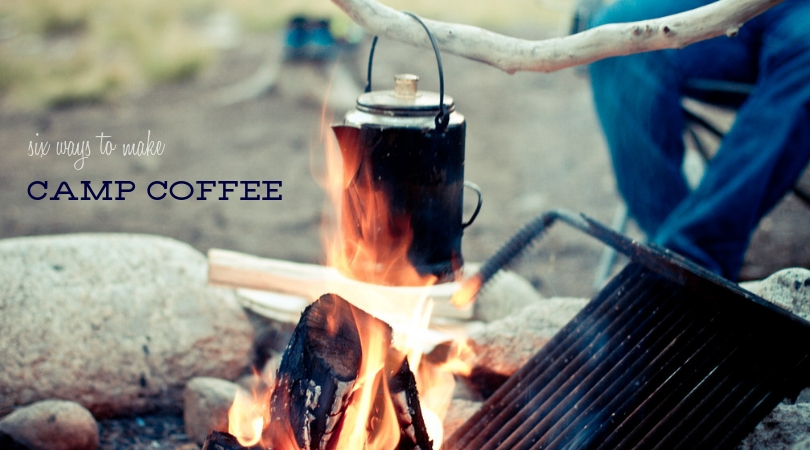 When I plan a camping trip there are a few comforts that are non-negotiable, even when hiking deep into the backcountry. One is warmth, and I have a ridiculously low-temp sleeping bag with a waterproof shell to ensure I will never again stay up all night shivering.  The other is hot morning coffee, preferably ready within 5 minutes of  getting out of the tent.

The truth is, coffee tastes darn good on a chilly morning after a night of sleeping under the stars, no matter how you make it.

There are probably a dozen ways to make coffee at camp, and every caffeinated camper has their own morning ritual. I have one myself and I call it “the cone” but I also love experimenting with new methods to make coffee at camp. From the classic cowboy method to fancy backcountry espresso, here’s how Northwest campers get their morning buzz in the wilderness. 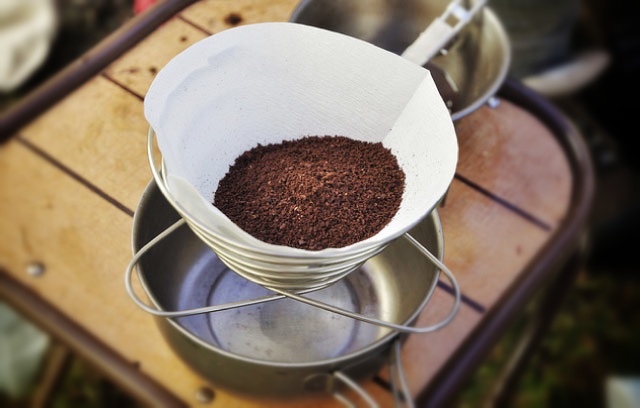 You may know this as the “pour over method” of making coffee.  This is our go-to method of making coffee at home, and it’s easy to just pack the plastic drip cone and disposable filters for a car camping trip. This method is a cinch. Simply place the paper filter into the cone, add one heaping tablespoon of ground coffee per person (pre-grind your beans at home), position it over a cup or pot, and lastly, slowly pour in just-boiled water.

The red plastic cones are lightweight and cheap, but for backpacking trips when space is at a premium, try the Sea to Summit Collapsible Coffee Dripper made of silicone. It weighs in at 2.9 ounces. 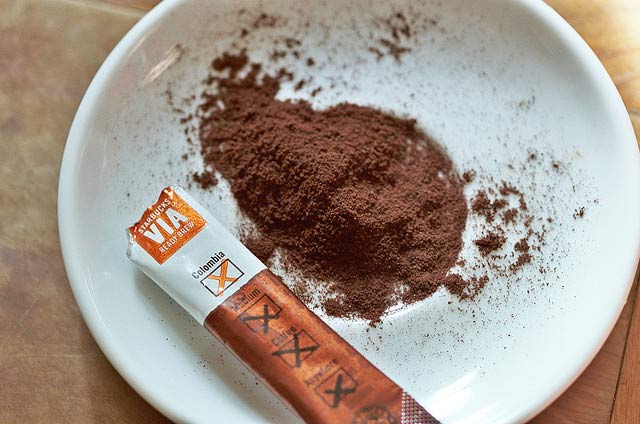 For backpacking I often keep it simple, meaning instant. And I don’t mean Folgers Crystals. Starbucks makes a variety of instant coffees called Via that will totally challenge your notion that “instant coffee sucks.” Via doesn’t suck. We even keep some around the house just in case we ever find ourselves out of beans. Although I would always opt for freshly-ground at home if given the choice, Starbucks Via is a fine substitute in the backcountry. Not only is it easy-peasy (just add boiling water, mix it right in your cup) and lightweight to pack in, there are no water-soaked coffee grounds to pack out. 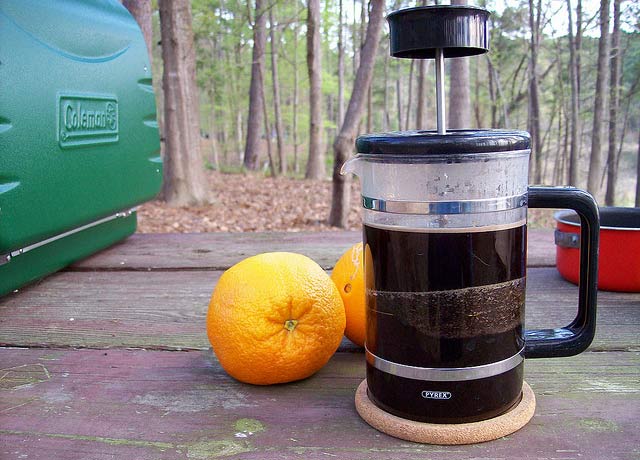 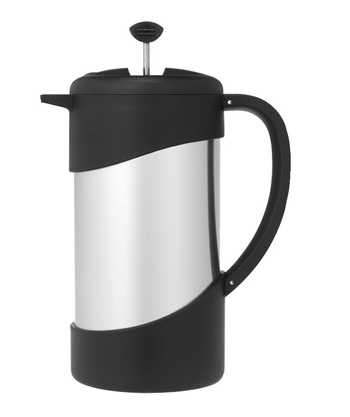 Making the morning coffee at camp for a crowd is always a little tricky, but this 34-oz Stainless Steel French Press Coffee Maker makes it easy.

French press makes the job of preparing a large batch of coffee a cinch, and this special vessel keeps it hot. And it is durable stainless steel, not glass–perfect for the rough and tumble of a lively campground.

If you aren’t familiar with using a french press, the main thing to know is that your coffee should be ground more coarsely than, say, drip coffee. I usually do one rounded spoon of ground coffee per cup.

You put the ground coffee in this thing, then fill it with boiling water and let it steep for exactly four minutes. Then, slowly press down the plunger, which has a very fine-mesh screen – this pushes all the coffee grounds down to the bottom. Serve it from the same vessel. See? Easy.

Clean-up tip: The only thing that isn’t so easy with french press is the clean-up; rinsing the grounds off the screen can be a pain at camp where there’s no running water and garbage disposal. Try dunking the plunger into a clean bowl of water and swishing it around to get the grounds off. 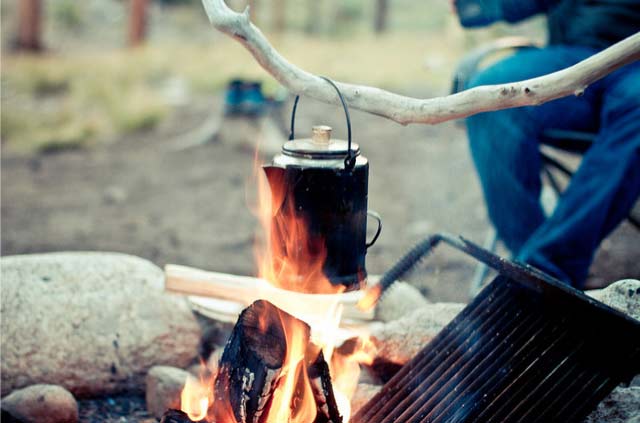 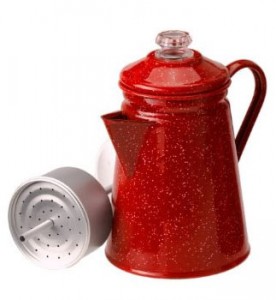 We used to “play camping” when I was a little kid in the 1970s, getting out all of our camping dishes and pots and chairs in the middle of winter. My favorite item was the old metal percolator. I loved assembling all of the parts and pretending to cook up coffee on our “campfire.”

If you’re looking for a dose of nostalgia in your morning cup of joe and don’t mind keeping an eye on the dome, try a percolator. One of these candy-hued enamel models from GSI will add a splash of retro to your morning picnic table.

To make the coffee, assemble the percolator and fill it with water to just below the basket insert. Then put the coffee grounds into the basket, about 1 heaping tablespoon of ground coffee per cup of water. Next, bring the percolator to a low boil. You can do this on a camp stove or over a campfire. You will know it is near a boil when you start to see liquid popping into the dome. From here, you want to lower the heat and just simmer for another 5-10 minutes. If you are using a campfire, move the percolator away from the direct flame so it can simmer instead of boil.

The trick to perfecting coffee in the percolator is to keep an eye on the translucent dome. If the coffee is too pale it won’t be strong enough, but if you let it go too long it gets dark, strong and very bitter. That’s because coffee in a percolator will continue to “percolate” through the grounds again and again until you stop the process.

Percolator coffee has a bit of a bad rap among coffee connoisseurs for being flavorless or charred, and of course the Northwest is a hotbed for coffee snobs. Again, the trick is to keep an eye on it, and your coffee will turn out just fine. So is anyone making camp coffee in the percolator here these days? Oh yes — for more see our reader responses below. 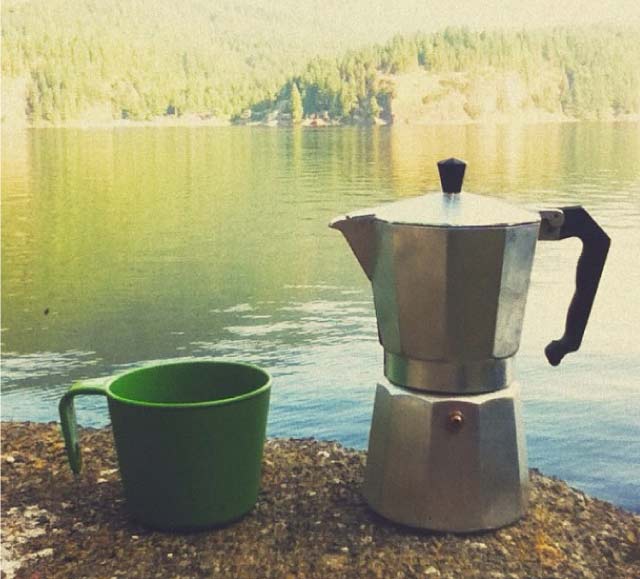 Maybe you’re an Italophile, or perhaps you love things that are beautifully-designed, in which case I’ll bet you already have one of these beautiful little moka pots. My mid-century modernist self has had one of these on my covet list for years, but for some reason I’ve never taken the plunge and purchased one.

This is not a percolator. A moka pot operates in different way and the mechanism results in strong coffee that reminds me of espresso, but without the crema. These pots are often referred to as “stovetop espresso machines” though purists will argue that the result is not true espresso. Blah.

If it can go on a stove at home, it can go on your camp stove, and many campers love these because it means they can sip delicious espresso at sunrise in the backcountry. The pots feature a unique octagon shape first designed in Italy in 1933. To make coffee, you fill the lower chamber with water and the middle filter with ground coffee (a fine espresso grind is preferred). Then place the pot on the stove and heat it until the water boils. This begins a pressurizing process that forces the water up through the espresso and into the pot’s upper chamber, ready to be served. 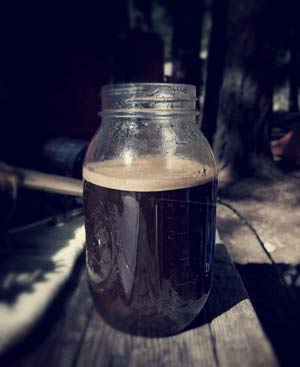 The first time I prepared cowboy coffee I was appropriately camped in a part of California that was notorious as a filming location for all those John Wayne cowboy flicks.  Out there on the wide-open range, cowboy coffee wasn’t half bad.

This preparation method is simple and requires no special equipment beyond what you’ll already have with you – a stove or fire, a pot, and some water. Boil the water in a pot then and add the ground coffee to the pot (the same ratio you would use for french press is fine – one rounded spoonful per cup of water). Remove the pot from the boil, give it stir, then let it all steep for about four minutes. The coffee grounds will have settled onto the bottom of the pot. Pour the coffee into cups, being careful not to disturb the settled grounds. The more careful you are, the fewer grounds you’ll be picking out of your teeth later. I’d recommend a course grind for the coffee, similar to french press. It the coffee is a drip grind it might have trouble settling.

Another option is to put the ground coffee into a vessel, such as a large jar or serving carafe  and then pour the boiling water on top of it. Give it a stir, let the grounds settle and the coffee will steep.

HIPSTER VARIATION: To make cold brew coffee at camp, follow the instructions above with two changes. 1) Use COLD (or room temp) water, and 2) let the jar sit and steep overnight. It’s best to prep your cold brew coffee afternoon before you plan to drink it (at least 18 hours of steeping time is best) and make sure the jar is kept out of the sun.

WHAT READERS ARE SAYING:

How do You Make Your Coffee at Camp? 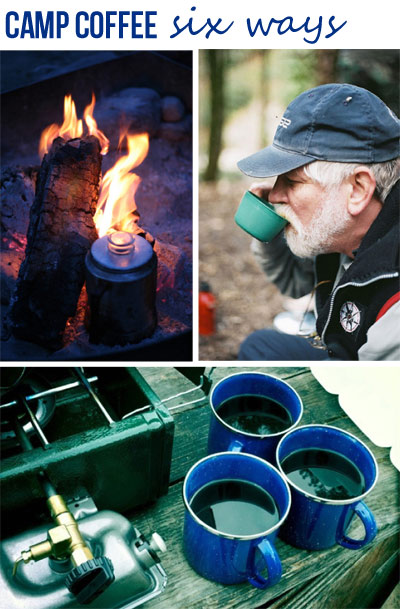 Jill Jordan-Summers: “French press, but if in a bind instant coffee.”

Susan White: “Any way I can! Usually boil water and use a plastic cup drip thing with #2 filter. One cup at a time. It’s wonderful that way.”

James DeVore: “We have a Coleman stovetop drip maker for our travel trailer.”

Susana Muñoz Meister: “We love our REI french press. Nothing like a cup of bold coffee sitting by the campfire.”

Renae Meredith: “In the past I’ve taken my Italian Moka pot and used it on the camp stove. It worked great.”

Julie Smith: “Perk it over a campfire in a old-fashioned metal coffee pot. Best coffee ever.”

Jennifer Johnson: “I either use one of those old-fashioned percolators with the glass knob on top (did that this weekend) or if I’m in a hurry, I’ll use Via instant (that’s what goes backpacking).”

What about YOU? How do you make your coffee at camp? 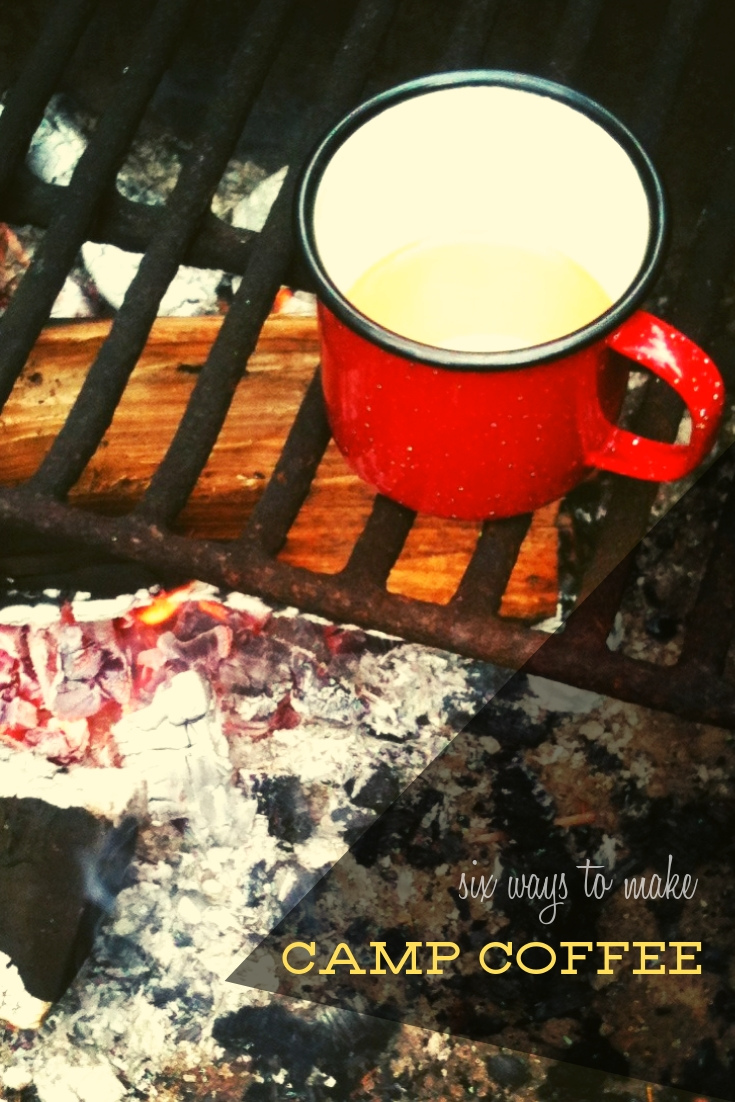